This is an auspicious time of year.  The days are short, but they are intense.  The cold sharpens our senses and our shadows are longer, reminding us of our existence and the possibilities of who we could grow to be.

The holidays packed into the end of the secular year also infuse the days with more moments of reflection.  I recently attended a class with Rabbi Sam Shor which connected many aspects of this holiday season: gratitude, hope, tradition, and peace.

Chanukah, the festival of lights, comes each year when the days are short and filled with darkness.  We light a candle each night for 8 nights, gradually bringing more and more light to the world. The Lubavitcher Rebbe said, “a little light of truth can push the darkness away,” and in that sense, each light of Chanukah represents adding truth to the world. 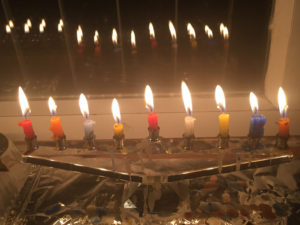 As children, we learned the miracle of Chanukah took place following the desecration of the temple by the Greeks.  The Jews who returned to the holy temple could not find enough oil to light the menorah. They found only one jar of oil which miraculously lasted 8 nights.  We commemorate this miracle each year with Chanukah, which means “dedication,” as a remembrance of the rededication of the temple after its defilement.

In the telling and re-telling of the Chanukah story, we look past the little jar of oil, but in doing so, we miss an incredible connection…

Thousands of years earlier, God created a flood which destroyed the world.  After the rain abated, Noah sent a dove from the ark to search for a sign that the flood was over.  The dove returned with an olive branch in its beak, signaling the end of the floods and a promise from God that humanity would never again be destroyed.  What happened to this olive branch? According to Midrashic sources, Noah’s family pressed the olives from the olive branch into oil. And this tiny amount of oil, carefully preserved in a single cruse, is the very oil which the Jews used following the desecration of the temple to light the menorah.

The miracle of the oil is not only the miracle of time in which the oil lasted eight days.  In addition, it is a miracle of tradition and connection: the Jews preserved a symbol of a covenant of peace between humanity and God, and used its fruits to rededicate their holy temple and their commitment to God.

These have been terrifying and sobering days for the Jewish people in the United States, with the brutal killing of 11 Jews in Pittsburgh in a synagogue on the Sabbath.  In the days following, there were many demonstrations of unity and strength from within the Jewish community and with other faiths and communities. But there have also been an uptick in antisemitic acts of vandalism and violence.

Chanukah is our reminder that even in the darkest moments, we can add light to the world.  The very first celebration of Chanukah emitted light that was imbued with the promise of peace.  This holiday of Chanukah is about rebuilding after destruction, and rebuilding with a commitment to our greater humanity and a dedication to peace.

They say most Jewish holidays can be explained in one phrase: “They tried to kill us, we won, let’s eat.”  Chanukah is no exception! Even today, evil and darkness in the world try to overpower us and snuff out our light… but it will never succeed.  The light of Chanukah is a reminder that we are inheritors of God’s everlasting promise of peace. As we light our Chanukah candles this year, let’s reconnect to the first lights, and rededicate ourselves to the dove’s promise of humanity and peace in our world.

2 Replies to “Chanukah and Its Promise of Peace”